About the Moraine Trail-Northern Section

Only a few parcels of open space existed along the spine of the glacial moraine that stretches from Bourne to Woods Hole when the town’s Park and Open Space Plan of 1986 identified the goal of establishing a moraine greenway. By specifically targeting land for acquisition for this purpose, The 300 Committee helped the town establish the 11-mile Moraine Trail. Starting at Route 151, the trail follows an easement down the wildlife corridor between Route 28 and Ballymeade Country Club, then passes through conservation land, crossing Thomas Landers, Blacksmith Shop and Brick Kiln roads to Long Pond and Grews Pond. Because it follows the moraine, the wooded terrain is rugged, with high ridges and steep valleys.

The northern section of the Moraine Trail runs from Route 151 to Thomas Landers Road, about 2.9 miles. Significant progress in the greenway came in 1995 when, by luck of availability, the town purchased a total of 126 acres on the moraine. Four of the properties were in the northern section, including 64 acres belonging to the family of Anna Gordon. At the family’s request, the town named the trail in this area after her. Another large piece of the greenway was added with the town’s purchase of two parcels in 2002 from CLSV Associates Limited Partnership, the developers of Ballymeade Estates. The 115-acre parcel, called Wyldewood after the subdivision CLSV planned for the site, surrounds 14.7 acres of required open space around Highwood Lane. The required open space is still owned by the developers. The other parcel, 14.6 acres called Turtle Pond Fields, is north of Wyldewood, not far from Longshank Circle and Cairn Ridge Road.

Part of the trail follows an old dirt way called Ox Pasture Road. Town maps in the 1800s show Ox Pasture Road leading north from Thomas Landers, which then was called Mill Road because it was the way to Dexter’s Mill on the Coonamessett River. The southern portion of this section of the trail was re-routed in 2016 to avoid crossing private property.

Parking is available on the south side of Route 151, east of Route 28. The trail begins opposite the Route 28 North sign. To enter at Thomas Landers Road, heading north on the trail, it is best to park on the grassy shoulder of Technology Park Drive, where space allows. The northbound trail entrance is just across Thomas Landers from Tech Park Drive.

A detailed map of the Moraine Trail is available at The 300 Committee office. 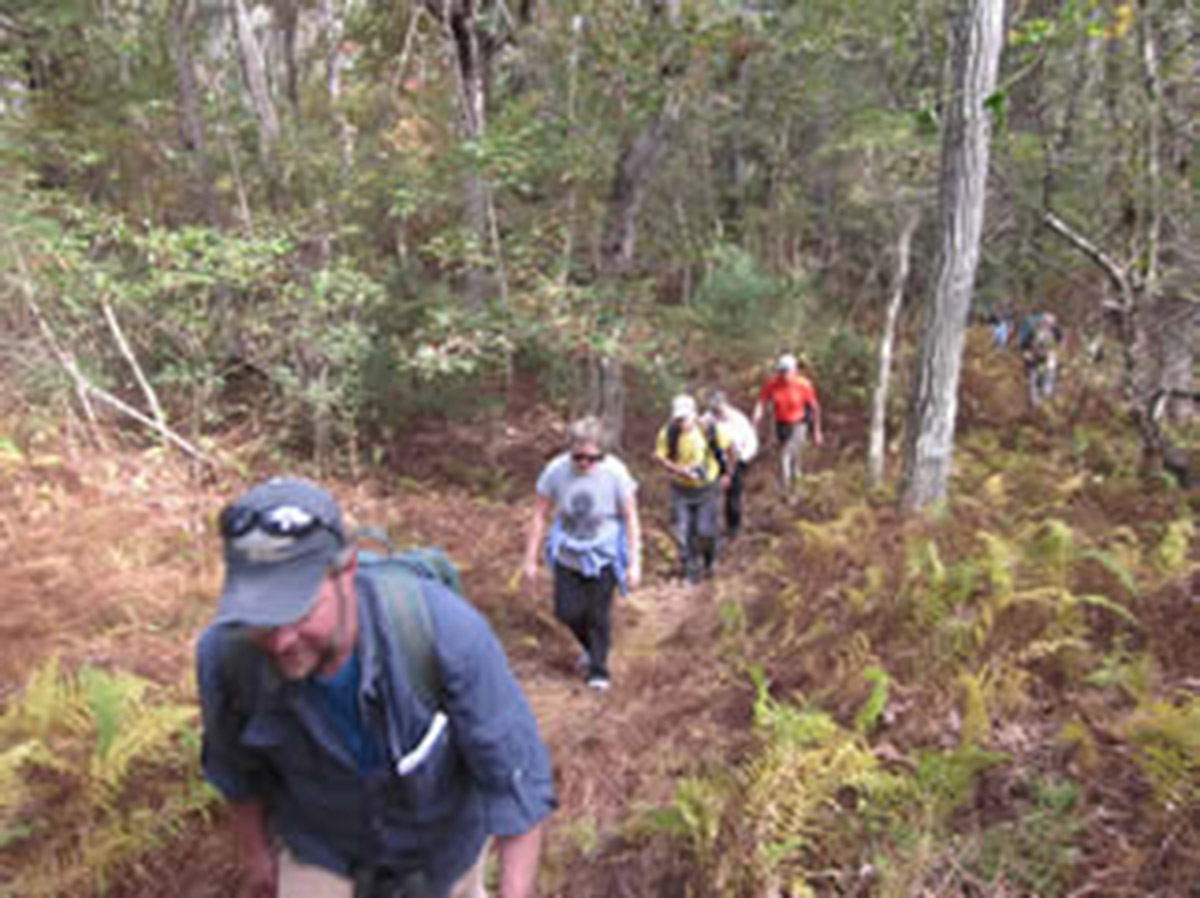 Enjoying a rugged hike on the northern MT.